The IRSA Foundation was a co-organizer of the international scientific conference “History of art history in Central, Eastern and South-eastern Europe” in Toruń. The conference celebrated the 200th anniversary of the first lecture in art history at the University of Vilnius.

Dr. Józef Grabski chaired the first session “Section A”: The Genesis of Art History as a Science” and gave a lecture entitled “The 30th Anniversary of the IRSA Institute of Art History Research”.

First Meeting of the IRSA Foundation Council with the Foundation 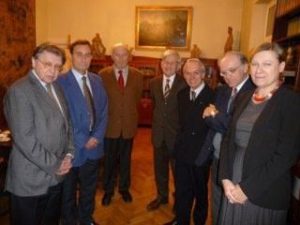 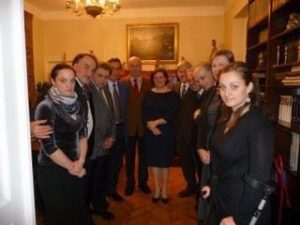 The Director of the IRSA Foundation, Dr. Józef Grabski, was invited by the Minister of Culture of Lithuania, Arūnas Gelūnas, to the inauguration of the Year of Mikalojus Konstantinas Čiurlionis (1875-1911). After the concert performed by former Lithuanian President Vytautas Landsbergis, he was received by the President of the Republic of Lithuania Dalia Grybauskaitė. During the meeting with the Minister of Culture of Lithuania and the President, the possible cooperation of the IRSA Foundation with the University of Kaunas was discussed. The project would concern documenting the art deco architecture as well as the influence of Bauhaus on urban planning of Kaunas as the capital of Lithuania in the interwar period until 1940.

Cooperation of IRSA Foundation with the Leonid Kuczma ‘Ukraine’ Foundation

The invitation was the result of the success of the previously organized scientific conference in Kremenets, which was attended by representatives of Ukrainian scientific and cultural institutions from Kiev. Further possibilities of Polish-Ukrainian cooperation, and in particular the organization of shared open-air painting sessions, were discussed by the Ukrainian deputy minister of Culture Timofiej Kochan, Ukraine’s Folk Artist Oksana Biłozir, and Dr. Józef Grabski.

During a stay in Vilnius, the President of the IRSA Foundation paid a visit to the Ambassador Czesław Okińczyc, lawyer, Signatory of the Lithuanian Independence Act, Ambassador Extraordinary and Plenipotentiary of the Republic of Lithuania, an adviser to Prime Minister RL, a sympathizer of the IRSA Institute. The talks concerned the involvement of the IRSA Foundation in the development of 19th and 20th-century architecture which is a common cultural heritage. 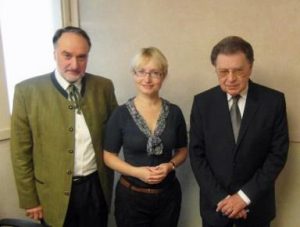 Meeting with the Lithuanian Chancellor

The IRSA Institute took part in the international book fair in Frankfurt am Main, bringing together publishers, booksellers, agents and authors from over 6,500 companies, and over 100 countries around the world. The ARTIBUS ET HISTORIAE journal, co-financed by the IRSA Foundation, was presented.

On the occasion of the 130th birth anniversary of the artist Nicholas I. Fechin, the “The Second Kazan Art History Readings” scientific conference, devoted to the artist’s work, was organized by the Kazan University and the Museum of Art at the Kremlin in Kazan. The President of the IRSA Foundation, Dr. Józef Grabski, gave a lecture entitled “Through Practice, Observation of Nature and the Old Masters is Perfection. The Sources of Inspiration of Nicolai I. Fechin (1881-1955). ” 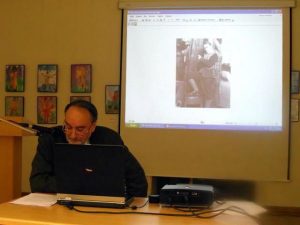 At the invitation of the IRSA Foundation, as part of a long-term cooperation with Chinese scientists, the Chinese Institute of Art Studies visited the headquarters of the IRSA Institute of Art, preparing an article about Chinese art for the ARTIBUS ET HISTORIAE magazine. 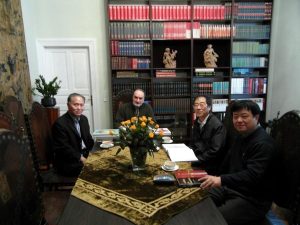 As a result of joint efforts by the IRSA Institute of Art Research and the University of Shanghai, the Ph.D. student of Professor Yaochang, Ms. Chen Shujun could carry out research on the Polish film poster. Ms. Chen Shujun received a two-year scholarship in Poland to conduct research and to prepare her doctorate. She has previously organized a large exhibition on the Polish poster school in Shanghai. This exhibition toured in several major university cities in China, contributing to the outstanding achievements of Polish artists in the field of poster art.

Visit of the founders of “Fondazione Romualdo del Bianco “to IRSA

During the visit of the Italian guests, contacts and joint projects of the IRSA Foundation with Fondazione Romualdo Del Bianco were discussed.

The director of the Potocki Palace in Lviv, from the branch of the Lviv Art Gallery, Oksana Kozinkiewicz and Wiktor Kusznirenko, the president of the Pidhirtsi Castle Foundation, which is also located in the Potocki Palace, visited the Krakow headquarters of the IRSA Institute.

During the meeting, the results of the current cooperation between the IRSA Foundation and partners from Ukraine (open-air painting sessions in Krzemieniec 2011, the scientific conference “Kremenets in the 30s of the twentieth century” on June 25th, 2011) and prospective cooperation in the near future were discussed.