In 2018 the IRSA Foundation published two issues of the ARTIBUS ET HISTORIAE journal: 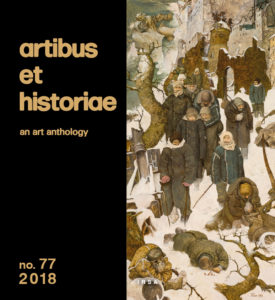 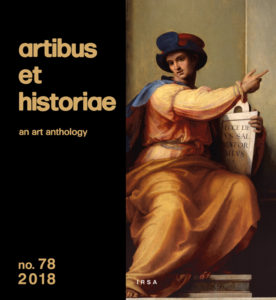 The Foundation donated a set of photographic prints which had been used as illustrations in the book Sztuka Trzeciej Rzeszy [Art of the Third Reich] by the eminent Polish art historian, Prof. Piotr Krakowski , to the Photolibrary of the Institute of Art History of the Jagiellonian University in Cracow. The book was  published by IRSA in 1992.

Gift by the Museum Belvedere in Vienna

The IRSA Foundation library received a gift of twenty books published by the Museum Belvedere in Vienna.

The Foundation was visited by Jadwiga Kukułczanka (Koukou Chanska), a Polish writer and translator who had been living in Paris for many years. She is the author of numerous film screenplays and an eminent translator of Polish literature into French (e.g. W. Gombrowicz, Witkacy, Z. Nałkowska, J. Szaniawski) and of French literature into Polish (e.g. J. Anouilh, S. Beckett, G. Feydeau, H. de Montherlant). The writer deposited at the IRSA Institute her collection of works on paper by Jan Sawka and Igor Mitoraj’s drawings intended as illustrations to her screenplay L’âne qui joue de la lyre (1975), which Wojciech Has prepared to be filmed shortly before his death.

The writer committed herself to make a donation to the IRSA Foundation with the aim of publishing a book with her screenplay illustrated with Sawka’s works and an essay by Prof. Tadeusz Lubelski discussing the involvement of Wojciech Jerzy Has in the adaptation of the screenplay into film.

Preparations for publishing a book about Jerzy Tchórzewski 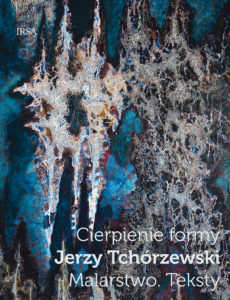 A Venice-related Exhibition in Lviv

The Chair of the IRSA Foundation, Dr Józef Grabski, participated in a meeting of the Lviv Art Gallery Council and took part in the opening of an exhibition entitled Venice – a State of the Soul, held in the Potocki Palace in Lviv, to which organisation and conception he had contributed.

Meeting with the Director of the Royal Castle in Warsaw

The possibilities of bringing to Poland the View of the Capitoline Hill with the Church of Santa Maria in Aracoeli (1768), one of Bernardo Bellotto called Canaletto’s first paintings from his series of the views of Rome, originally commissioned by King Stanislaus August Poniatowski for the Ujazdów Castle in Warsaw, were discussed at a meeting with Prof. Wojciech Fałkowski, Director of the Royal Castle in Warsaw, held in the office of the IRSA Foundation.

Meeting  with the Director of the Royal Castle in Warsaw, IRSA Foundation

Józef Grabski visited London to talk about a possibility of acquiring Bernardo Bellotto’s View of the Capitoline Hill with the Church of Santa Maria in Aracoeli (1768) for the collection of the Royal Castle in Warsaw.

A translation of the book by Rachel Wischnitzer completed

Ms Renata Stein (New York) completed her translation of a book by Rachel Bernstein-Wischnitzer (1885–1989), Symbole und Gestalten der jüdischen Kunst, from the German into English. The book will be published by the IRSA Foundation with the financial support of the Taube Philanthropies – Taube Foundation for Jewish Life and Culture, Los Angeles, which provided funding for the translation.

Dr Andrew John Martin from Munich, a specialist in Italian Renaissance art, was invited to become a member of the Advisory Committee of ARTIBUS ET HISTORIAE, following the death of Prof. Everett Fahy on 23 April 2018. Everett Fahy, a friend of the Institute since the inception of IRSA , was the director of The Frick Collection in New York from 1973 to 1986, and after the retirement of Prof. John Pope-Hennessy in 1986, succeeded him as the curator of European painting in The Metropolitan Museum of Art in New York.

Dr Andrew John Martin, a new member  the ARTIBUS ET HISTORIAE Advisory Committee with the Chair of the IRSA Foundation during a scholarly conference ‘Lorenzo Lotto. Portraits’, in the Prado Museum in Madrid, 24 September 2018

The Chair of the Foundation, along with the Director of the Royal Castle in Warsaw, Prof. Wojciech Fałkowski, and a member of the Foundation’s Council, Prof. Andrzej Rottermund, had been involved in negotiations dealing with the purchase of Bernardo Bellotto’s View of the Capitoline Hill with the Church of Santa Maria in Aracoeli (1768), commissioned by King Stanislaus August Poniatowski for Polish collections. The painting was purchased from the funds provided by the Prime Minister Mateusz Morawiecki, with a financial contribution of the Teresa Sahakian Foundation.

After 200 years Bernardo Bellotto’s View of the Capitoline Hill with the Church of Santa Maria in Aracoeli, a painting commissioned by King Stanislaus August Poniatowski in 1768, returned to the Royal Castle in Warsaw

A visit at IRSA of Achille Bonito Oliva, an author of the famous book L’Ideologia del tradittore, published by IRSA Publishing House in a Polish translation by Mateusz Salwa as Ideologia zdrajcy. Sztuka, maniera, manieryzm (Cracow, 2017). 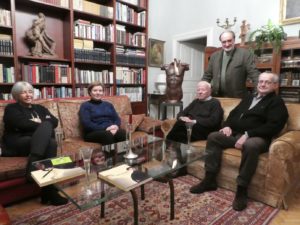 A visit of Achille Bonito Oliva at IRSA

As part of preliminary  works for a book on the life and works of Jerzy Tchórzewski, while gathering documentary materials on the artist, the Chair of the IRSA Foundation visited the eminent philosopher Jacques Taminiaux, who had been friendly with many Polish artists since the 1950s,  and was an author of one of critical articles on Jerzy Tchórzewski. 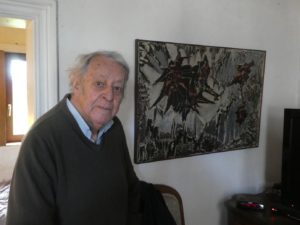 Prof. Jacques Taminiaux in his home against a painting by Jerzy Tchórzewski,
offered to him by the painter in 1960

Funding of the Marian Sokołowski Award

The IRSA Foundation funded a Special Award (in the amount of 2 000 PLN) as a part of the Marian Sokołowski Prize, for the author of the best MA thesis in art history written at Cracow universities in the 2017/2018 academic year. In 2018 the IRSA award went to Piotr Józef Janowski, MA, for his thesis entitled, ‘The Royal Palace in Łobzów. Its Architecture; Courtly end Economic Functions’, written in the Institute of the History of Art and Culture of the John Paul II Pontifical University in Cracow, under supervision of Prof. Kazimierz Kuczman.