Meeting with the “Pidhirtsi Castle” Foundation

Meeting with the Ukrainian partners of the “Pidhirtsi Castle” Foundation. The purpose was to attempt to rescue one of the most important Polish residences in the Eastern Borderlands, the “Versailles of the East” – the Castle in Pidhirtsi from the devastation. 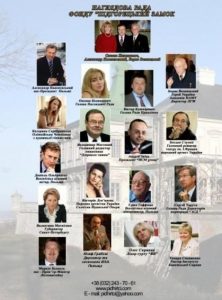 IRSA at the 650th anniversary of the Royal Wawel Cathedral consecration

Participation of the IRSA Foundation in the scientific conference “The 650th anniversary of the consecration of the Royal Wawel Cathedral”. Members of IRSA actively participated in the scientific session entitled “Jewel in the Crown”. During the conference, members of the IRSA Foundation presented publications by IRSA at their stand. The publication that attracted particular interest was Stanisław Mossakowski’s monograph “King Sigismund Chapel at Cracow Cathedral (1515-1533)”.

Preliminary talks with Jerzy Hofmann about a possible movie about Pidhirtsi

The Foundation Council held a preliminary meeting with Polish movie director Jerzy Hofmann regarding making a film about Pidhirtsi, as well as one of the most famous and colorful owners of the Podhore Castle, emir Wacław Seweryn Rzewuski – a traveler and researcher of the Orient, especially Turkey and Arab countries.

Organizing a conference in the Diocesan Museum in Siedlce

The IRSA Foundation organized a conference at the Diocesan Museum in Siedlce as part of a conference series entitled “Meeting With One Painting”. IRSA devoted the event to the influence of Titian’s paintings on El Greco’s work.

Participation in a conference about funding activities of Cracow bishops

IRSA Foundation participated in the conference dedicated to “Funding Activities of Cracow Bishops”. During the conference, the stand with IRSA publications attracted significant interest from the participants.

International Conference “Art in the Era of El Greco”

To honor 2014 as the year of El Greco the Royal Castle in Warsaw organized the international scientific conference “Art in the Era of El Greco”. The representative of the IRSA Foundation, Dr. Józef Grabski, gave a lecture on entitled “The Iconography of St. Francis in the Work of El Greco and his Workshop: Typology, Variants, Derivatives”.

A trip to Doha, Qatar, at the invitation of Sheik Faisal Al Thani. The purpose of the talks is consulting his museum creation.

A trip to Dubai and Abu Dhabi at the invitation of the LCE International Architectural Consortium, who prepare the construction of a 480 m skyscraper-memorial to commemorate the founding of the United Arab Emirates by Sheikh Zaydab ibn Sultan Al Nahajjan. The tower, a multifunctional center, is scheduled to be ready in 2021 for the 50th anniversary of the founding of the state. The function of the IRSA Foundation is to consult for the establishment of a cultural center that is included skyscraper project.

Meeting with the “Pidhirtsi Castle” Foundation

Meeting with the Foundation “Pidhirtsi Castle” Foundation Council at the headquarters of the IRSA Foundation.

Cooperation with the Chinese Wall Organization

The president of the IRSA Foundation, Dr. Józef Grabski, and the president of Chinese Wall Organization, Guo Zhgong Xing,  signed an agreement of cooperation. 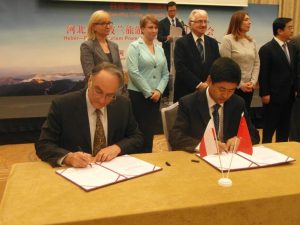 Meeting with representatives of the Lviv Polytechnic

The IRSA Foundation met with representatives of the Polytechnic Lviv concerning the previously organized symposium dedicated to residential architecture in the Eastern Borderlands in the 17th and 18th century. Discussions concerned publications of scientific results presented during the symposium. 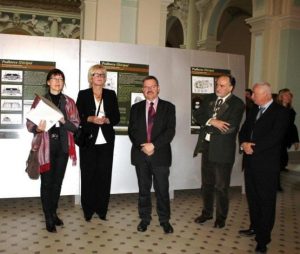 IRSA Foundation with representatives of the Lviv Polytechnic

Conference dedicated to the Lanckoroński gift for the Polish Nation.

Members of the IRSA Foundation participated in the scientific conference at the Royal Wawel Castle entitled “A gift for the Nation. The 20th anniversary of the Lanckoronski Collection at the Wawel”.

Conference of the Association of Art Historians, of the Jagiellonian University

IRSA Foundation participated in the Conference of the Association of Art Historians, IHS UJ, “Ornament and the decoration of a work of art”

The president of the IRSA Foundation met with the delegation of the Culture Committee of the Verkhovna Rada of Ukraine. The goal was to discuss possible assistance from Polish partners in preparing legislation that would more effectively protect cultural property and heritage. 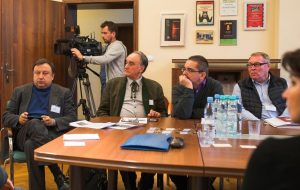 First from the left – Mykola Kniazycykyj, deputy of the Verkhovna Rada of Ukraine, head of the Culture and Media Committee